We spoke at Author 101 in Las Vegas, NV on October 27, 2013. There we met Veronica Brooks, the author of “Ninety Days to Start Gaining Wealth” and she is the founder of Wealth Palace Magazine. She bought a copy of I Love ME! and contributed the last $320 we needed to reach our $1,500 goal for our Indiegogo book campaign. She is such a kind and amazing person, don’t you think so? 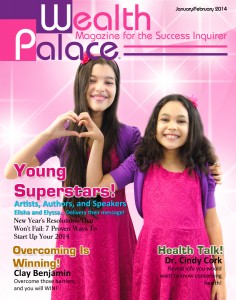 She also freely invited us to submit an article for the Wealth Palace Magazine, at NO cost whatsoever, (a great value) and we are in the front cover of the January/February Edition of 2014! Our article is called “New Year’s Resolutions That Won’t Fail: 7 Proven Ways to Start Up Your 2014“. In it, we are teaching authors, speakers, and business people 7 resolutions that won’t fail for them and why.

Just like the Wealth Palace Team, we believe that it takes hard work, imagination, determination, and effort to have success! Success comes after a large amount of failure, which is only a part of the journey. As Brian Tracy says, “You have not failed until you quit trying“.

I encourage you to subscribe to the Wealth Palace Magazine, so you can succeed with what you will learn and then you can send a success story!